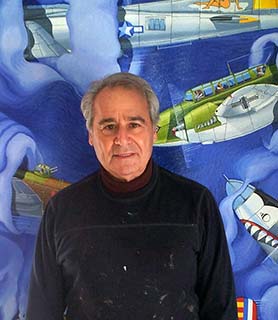 Education: Graduate of Parsons School of Design and BFA from New York University

Artist's Statement: "Throughout my career, I have attempted to create a social statement which would foster the awareness of the majestic beauty that surrounds us in our everyday existence"

"The most riveting of the works that carry a social theme is 'Anaconda No. 18' by Fred Nold.  Near the Municipal Building in Hastings where the gallery is housed, was a large industrial part that in now unclaimed shambles.  Every piece of trash and detritus, including two classic large automobiles from the 1950's is preserved as if in aspic.  Mr. Nold's van Gogh-like short brushstrokes signal emotion.  That our back is to the Hudson in this painting is a chilly statement".

Work Featured In the Following Galleries

The Neuberger Museum at the State University of Purchase, New York.

Hosted the "State of the Art", television show for five years, sponsored by WDMC which highlighted world-renown artists and their work in the Metropolitan area. The series featured those individuals who support artists and their endeavors: including directors, curators, educators, publishers and historians.